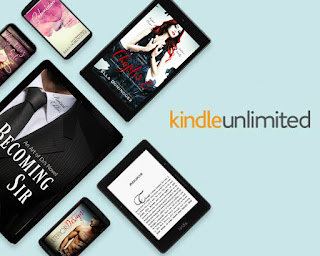 If you're subscribed to the Kindle Unlimited program, and a fan of my books, there's good news: the majority of my work is now available for your enjoyment.


Submission & Redemption Re-released into the Wild!

After a chance encounter brings a businessman face to face with an erotic set of paintings that were never intended to be sold, they rekindle a flame for the alternative lifestyle he was forced to give up. When he meets the shy artist, he hatches a wicked plan that will not only allow him access to more of her paintings, but to dominate and educate her in the ways of becoming his submissive. Faced with an offer that will permit her to explore her sexual desires—their passionate journey begins.
In spite of Dylan’s trust issues and wanting only a physical relationship with distinct boundaries, their chemistry is powerful. Soon, he realizes that he can't resist Isabel’s spirited nature, her eagerness and lack of fear to learn from him, and most of all—her immense talent.
But Isabel has a hidden dominant streak that only Dylan brings out, and despite being drawn to one another, their unexpected struggle for control and their dark pasts that are looming in the shadows, threatens to strip them of the fragile bond they so desperately cling to.

Redemption: *Can be read before The Art of D/s Rewritten Trilogy (Submission, Domination, Control), but contains mild spoilers.*

For Isabel, art is her one saving grace from a life of cruelty and abuse. Bored with conventional sex and unfulfilling relationships, she looks to her own creativity to find an outlet for her secret desires. Introverted, self-critical, yet spirited, she yearns for love, acceptance, and control.
For Dylan, the answer to his control issues and sadistic fantasies waits for him within the walls of the Dark Asylum. Seeking redemption for his overwhelming guilt and sadness over the loss of his parents, he immerses himself completely in the worlds of art and BDSM with voracious passion.
Beginning on the night of the fated Studio 210 gallery show that steers Dylan toward the love of his life, this prequel highlights the years prior to meeting his soulmate and own little artist with a hidden dominant streak—Mistress Isabel. That very same night forever changes Isabel's future, as well, and leads her to the man who will capture her heart, dominate her world, and ultimately give her complete control.

Posted by Ella Dominguez at 9:28 PM No comments: 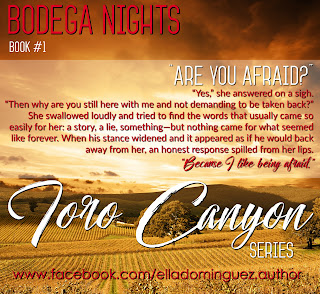 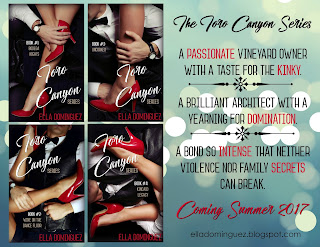 With wine in his blood, a vineyard owner seeks to expand his family's brand. Considered American royalty, it seems everything Remy touches turns to gold-except when it comes to relationships. That is, until he crosses paths with a brilliant architect. The intense attraction between them sparks something within him and quickly he realizes that the kinky inclinations he's held back for so long are exactly what she's longing for.

With a yearning for domination, Brenna seems to have found what she's been looking for in the passionate entrepreneur. But her closely guarded secrets threaten to put a kink in their rapidly growing bond.

iTunes & KoboPre-Order Links now up! Each book only $0.99! This price is ONLY effective during the pre-order period. Once they go live, prices will go up. Sorry, but pre-order option NOT available on Amazon.

Posted by Ella Dominguez at 7:00 AM No comments:

A Taste of House of Evans

Warning: This book is designed for readers 18+ due to language and graphic sexual content.

A blueprint for desire.

With a shared passion for breathing life into an unconventional dream home, the attraction between a struggling new grad of interior design and an award-winning architect with eclectic sexual tastes is irresistible. But with a cloud of lies and loss hanging over him, the only arrangement Logan wants is one of indulgence and pleasure. However, fate seems to have another design plan in mind for them—a plan that ultimately leads them down a path of desire and discovery.
When the man obsessed with creating his unusual home sets his sights on the woman who keeps unknowingly navigating her way back to him, lust clouds his judgment and he makes an inappropriate proposition. After nearly blowing his chances with the talented and alluring beauty, he readjusts his plans, because it just so happens that his sexy ulterior motives go hand-in-hand with her expertise in interior design.
Though Chloe may be young and naïve in Logan's eyes, she sees him for who and what he is: a man with severe commitment issues. But she's optimistic—maybe too optimistic. And she isn't easily deterred or scared away either, not even by the unusual nature of his design plans or his eclectic sexual tastes. In fact, she's intrigued by them. Faced with a man who can give her not only the experience she needs to propel her career, but everything she's ever fantasized about, she hopes that their physical and intellectual compatibility can prevail over his fears. And more importantly, that they can move forward to become not only design collaborators, but partners on a deeper level. 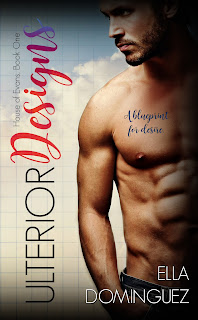 Chapter One: House of Evans

Casual-sexy attire—check. Just-got-fucked hairdo—check. Hadn’t been laid in over a month—double motherfucking check. Logan’s dick may not have seen the light of day, or rather the dark depths of a pussy, in thirty-some-odd days, but at least on outward appearances he looked sexually maintained.
Dimitry Moriarty, the highly sought after and openly gay interior designer, would be there any minute, and too much caffeine and nerves were getting the best of Logan. Although Logan wasn’t gay himself, he believed in keeping all his options open. If there was one thing he knew for certain, it was that pleasure could be gotten just about anywhere when one was willing to expand their horizons.
With everything he needed for his rendezvous printed and neatly presented on the dining room table, he prepared some music in anticipation of waiting another few minutes. To his surprise, there was a knock on the door. Pleased with Indulgent Designs' promptness, he took in a deep breath and opened the door. Though his head was still foggy from all the wine he’d consumed the previous night in celebration of his first night in his home, and his body still stiff from having slept on a mattress on the floor, the vision of pure elegance standing on the other side of the double doors quickly brought him out of his haze.
Momentarily taken aback that the person he was staring at wasn't Dimitry, Logan stood motionless as he silently assessed the lovely specimen of a woman who stood at least half-a-foot shorter than himself.
Her choice of clothing wasn’t anything to write home about—standard-issue khakis, a white button-down shirt and black flats, but that was the last thing on his mind. First and foremost, it was her deep-set caramel-colored irises hidden behind thick, ebony lashes that stared wide-eyed and expectantly at him. The muscles around his eyes tensed when they came to rest on her sensuous mouth. The faintest trace of a smile tipped her full lips upward, making him smile in return as his gaze slowly roamed over her body. As if her long locks the color of rye whiskey hanging around her shoulders in wispy curls, warm tawny complexion, sculpted cheekbones and curves weren't enough—her fragrance sent a rush of arousal clawing at his insides.
She let out a short, breathy laugh before she thrust a hand in his direction and introduced herself.
"I'm Ms. Stephens," she smiled up at him. "Mr. Moriarty will be joining us shortly."
Picking up on her nervousness, he quickly composed himself and took her hand into his as he stepped aside to allow her in.
Tardiness irked Logan and, normally, it would have put him in a bad mood. Time was money, after all. However, seeing his present company and the vibrancy in her eyes beckoning him, he couldn't help but feel fortunate for Moriarty's lack of timeliness. At any rate, it was still early and, technically, Dimitry wasn't late.
With a lick of her lips, she moved past him with eyes fixed upward on the decorative arch and scissor trusses spanning the one-hundred-foot vaulted ceiling. While she quietly inspected his home in those brief seconds, images of what his home looked like before its completion flickered in his brain like a movie reel. The same way he felt much of the time was how the house had once looked: barren, worn, and in disrepair.
Music floated from his stereo speakers and filled the blank canvas of his home. The soothing female voice and pulsating bass carried on the spring breeze up to the high ceiling and rippled through the room, but he barely heard it. His thoughts were on not only the attractive brunette standing near him, but the next chapter in making his dream come true: making the House of Evans into something magnificent.
Inwardly, he laughed at the name he had given it. Sure, it sounded pretentious, but it only seemed appropriate considering it had formerly been a place of worship, not to mention the amount of religion that had been shoved down his throat while growing up. Besides, anyone who knew him would understand the title was meant in jest. Mostly.
When sunbeams from a nearby window cast shadows against Ms. Stephens’ body and the faint outline of her nipples came into view beneath the thin material of her shirt, Logan was reminded why he loved a woman's body so much. Right on cue, his cock rose from its slumber, reminding him why he hated having such a one-track mind.


"Oh, I definitely know what I want." 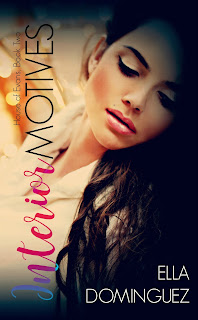 Chapter One: Icing on the Cake